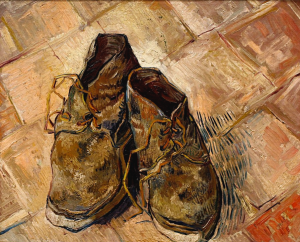 No one has since filled these.

A full-size photograph by Michael Weinberg Photography of this work may be seen here: Vincent van Gogh: Shoes, 1888

A tip of the beret to FamousBirthdays

This guy, the guy those guys were named after:

Baptized on this day in 1674, the real Jethro Tull was a very influential British agronomist who invented several farming tools, and promoted more modern techniques of agriculture.

The band, by the way, did not adopt the name because they admired Jethro Tull, or even knew of him. In 1967, the band changed their name frequently to keep themselves playing in London clubs. Names were supplied by their booking agents. “Jethro Tull” was suggested by a history buff, and they happened to be playing under that name when they attracted attention. So they kept it.

Your robot overlords will play catch with you. If they’re not too busy. And if you ask. Nicely.

These robots were made by researchers at the Swiss Federal Institute of Technology in Zurich (ETHZ) and use highly precise positioning sensors to tap the balls into play and then right themselves before they fall.

These Robot Quadrocopter Jugglers Perform For Your Amusement… For Now

Ben Schott’s blog at The New York Times features a vocabulary contest each weekend. This last one:

As ever, it’s the taking part that counts. The following took part especially well: …

Typoid fever: a condition of excessive irritation caused by minor errors of spelling, syntax, or grammar

(Basking in the warm –though virtual– applause.) Thank you, thank you.  Be sure to click the link to my name to see my other contributions. Which lost.

Stunning Astronomy Picture of the Day

The astropic du jour is a gorgeous timelapse of the aurora over Norway. A must see. The Quake: Tokyo Quiets Down

The giant TVs are silent, the neon lights dark and the bars of Tokyo half-empty. Two weeks after Japan’s deadly earthquake, the city that once never slept is learning to live with a new era of frugality.

Many public escalators are idle, the trains less frequent and the usually overflowing shelves of the round-the-clock convenience stores sparsely stocked.

In the daytime, under the crisp winter skies, the city almost seems to have recovered from the shock of the massive March 11 earthquake which sent a huge tsunami crashing into northeast Japan and triggered a nuclear crisis.

But nightfall reveals the reality — a fortnight after the twin disaster struck, the capital is still a shadow of its former self.

Lights Out in Japan : Discovery News

The Quake: The Reactors: A Status Report

CNN has an overview of what we know –and don’t know– about the six reactors at Fukushima Daiichi.

A tip of a fur-covered hat to Maximum meltdown : Class M

Well, not yet, but soon. This year’s record snowpack fell on saturated frozen ground. If spring rains melt it all at once, residents along the Red will face record-breaking floods. 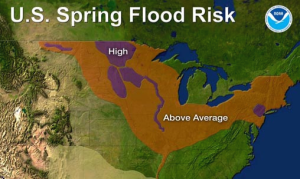 There is a huge amount of snow on the ground in North Dakota along the tributaries of the Red River, thanks to fall precipitation that was 150% – 300% of normal, and winter snows that have dumped up to 400% more precipitation than usual. If one were to melt this snow, it would amount to 4 – 6 inches of rain. If heavy rains occur at the same time that the snow melts, there is the potential for the greatest flood in history to affect the cities of Fargo and Grand Forks, the largest and third largest cities in North Dakota. NWS is giving a 35% chance that Fargo will see its greatest flood in history this spring, up from the 20% chance they gave in their February spring flood outlook.

The situation is similar in Minnesota, which has received about double its normal precipitation over the past 3 to 4 months, resulting in the 5th snowiest winter on record in Minneapolis. Snow depths are in excess of 20 inches over wide swaths of of the state, and this snow has a very high water content equivalent to 4 – 6 inches of rain. NWS is giving a 95% chance that the Mississippi River at St. Paul will exceed major flood stage this spring.

North Dakota around Fargo is one of the flattest places on earth. This makes the extent of flooding and thus the area under risk notoriously difficult to predict.

Think of a “normal” topographic map, with contour lines nestled inside one another. Water flooding such a map will fill up along the contours.

Not so North Dakota. Outside the river valleys themselves, the contour lines are few and far between. Once water gets out of the valley, it goes everywhere.

And where does it break out? You can’t be sure of that either. The map you have probably does not show last year’s erosion, insignificant when the water follows more contoured terrain, but a serious breach in flood defense in the Dakotas.